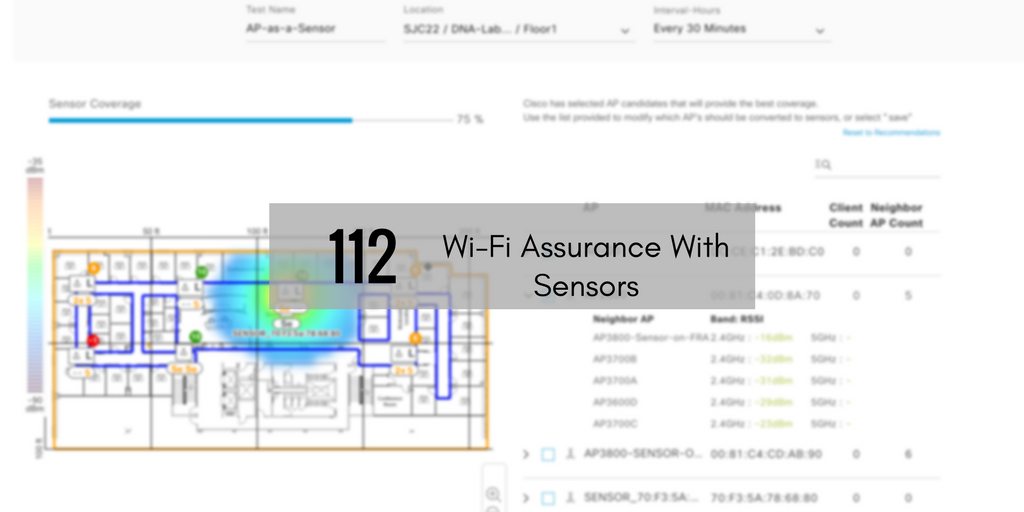 Fred Niehaus and Wes Purvis, of Cisco, discuss how the network sensor brings an impact with Wi-Fi assurance.

This episode was all brought together because of a recent announcement of Cisco’s dedicated Wi-Fi network sensor. A smaller AP-looking device, similar to the Cisco 1815, that can be wall-mounted or placed close to the users. It’s purpose is to validate Wi-Fi connectivity.

Named the Cisco Aironet Sensor, there are three components:

Wes Purvis talks about the requirements of running the dedicated sensor:

François and Rowell ask why even build a sensor with other companies in the market also developing their own kind of sensors. Primarily it was to give more visibility into the network and to do prescribed testing.

The Cisco Aironet Sensor will associate directly with a Cisco AP. Various health checks can be performed by acting like a client device. The results of those tests bypass the Cisco WLC and get reported directly to Cisco DNA Center.

There are three modes to the sensor:

Those last two modes are interesting. A Wave 2 AP can stop serving clients and become a sensor itself to run any diagnostic tests. The third option is available to APs with an XOR radio. One of the radios goes out of service to clients and acts as a client itself, connecting to other APs.

In the episode we did speak about turning an AP into a sensor and the cautions there. Because APs are not near the clients, the results may not reflect the experience of a real client.

Currently, Cisco supports a number of different tests on the sensor. There are about 10-15 available with future expansion into custom tests. Some of those tests include:

Let us know what you think below in the comments after you listen to the episode with Wes Purvis and Fred Niehaus.

T-Mobile Annouces Plans to Deploy 5G in 30 U.S. Cities this year. T-Mobile is already installing 5G equipment as it continues to build its LTE network in the US. The company should be able to deploy a comprehensive 5G layer in time for the debut of 5G consumer devices next year. The service will be used over the 600 MHz spectrum along with spectrum in the 28GHz and 39GHz bands. First cities to be served: New York, Los Angeles, Dallas and Las Vegas. Read more here.