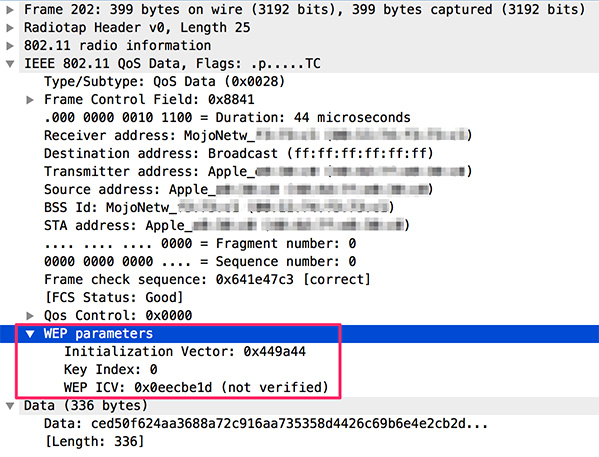 Pre-RSNA (Robust Security Network Association) is the main topic for this episode. Francois and I talk about why you shouldn’t be using these legacy security methods and in future episodes we talk about the Wi-Fi security mechanisms you should be using. This is part one of a multi-part series.

A couple of weaknesses have been found on WEP and it makes it very easy to crack.

The characteristics of WEP include: This is not really a security method but a common one people use. MAC filtering is a way to create a whitelist of MAC addresses allowed to join the Wi-Fi network. It’s easy to capture packets to find an authorized MAC address and then spoof it. L2 information are not encrypted in 802.11 frames. L3 to L7 is encrypted.

Another method which is not really security but commonly used. The SSID is not broadcasted in the beacon frames. The SSID still visible is management frames when a STA connects to it. You can spot the hidden SSID in a directed Probe Request frame.

It has been cracked. Not as easily as WEP but it has been cracked (using the same Cipher: RC4). Has been replaced by CCMP/AES. Also, TKIP only allows speeds up to 54Mbps. Like WEP, TKIP will be going away.