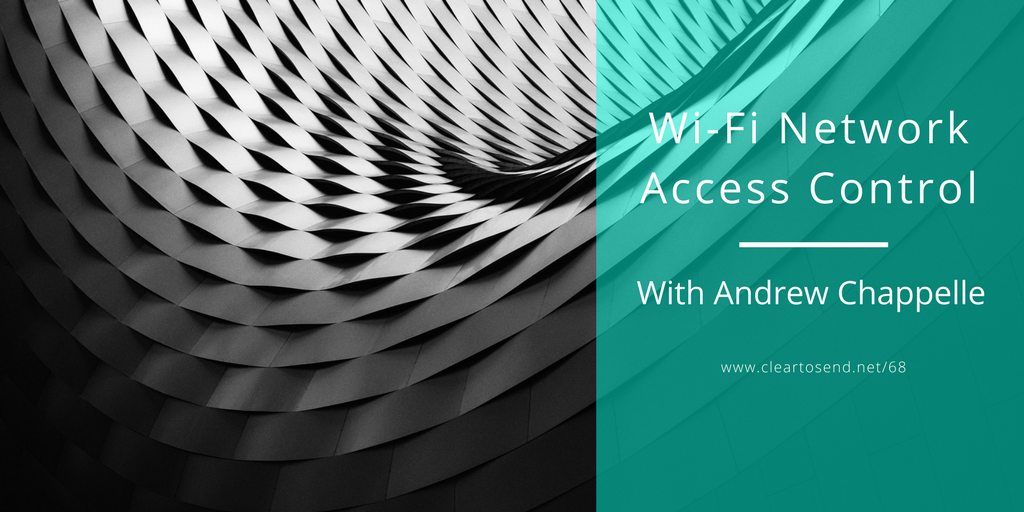 In this episode, we welcome Andrew Chappelle from Calgary, Alberta, Canada.

We talked about network access control focusing on securing the Wi-Fi network. He shared his experience with complex NAC systems such as Cisco ISE or Aruba ClearPass and also share his view of what the future of access control will look like.

Andrew Chappelle (CCIE-W #42377) works as a System Engineer for Aruba HPE out of Calgary. In his previous positions, he worked a lot on complex network access deployments. He is very knowledge about Wi-Fi and will soon be CWNE! I guess, we are going to have to bring him back on the show when he does! You can find him on twitter at @AngryWrelessGuy. He blogs at angrywirelessguy.wordpress.com.

The WHY: Why do we need a network access control for the WLAN infrastructure? Let’s talk about customer’s requirements:

The WHAT: What are the solutions to meet these requirements?

The HOW: How do we implement it? What do we need to make it happen?

We talked about the most common EAP methods used today.

What is coming next? What can we expect seeing in these NAC solutions in the near future?

Here is the link to the Wi-Fi issues submission form for one of our upcoming episode.

802.11r is the IEEE standard for fast roaming and this concept of roaming is also known as Fast Transition (FT). Here the initial handshake with the new AP is done even before the client roams to the target AP. The feature allows you to set up a network without choosing Enable for Fast Transition (FT). The Apple devices (iOS 10 clients) signal the Cisco APs to identify this functionality. Cisco APs mutually signal that adaptive 802.11r is supported on the network and perform an FT association on the WLAN.

Legacy wireless clients that do not support 802.11r can still join the same network however does not benefit from faster FT roaming. Legacy devices that do not recognize the FT AKM’s beacons and probe responses join as an 11i/WPA2 device.

This feature is supported on the following Wave2 APs:

QoS Fastlane simplifies the application traffic prioritization process so that network congestion is minimized and time sensitive traffic (like voice or video) is delivered on time.

To choose which iOS apps have their traffic prioritized by QoS Fastlane, configure the network with a configuration profile.

This feature support now extends to the following Cisco APs:

From Temur:
“Hello, do you have experience to use EAP-SIM or hotspot 2.0 in hotels or public areas to avoid installation of 3G/4G re translators from GSM providers? The problem is, if there is no 3G coverage in hotel floors, all the providers are installing those ugly antennas at each floor, near to my APs. we have three providers , so imagine what will happen to hotel design if all of them tries to install antennas. Is it possible to use existing WiFi infrastructure to avoid such installations?”

If you’re using Cisco APs, such as the 3700s, you could use the module for cell service.

The other option is to install a DAS system and have all providers use the same DAS system. This should be possible without having to install antennas for each carrier. Check out CTS050.

The WLAN Community Compensation Comparison is a survey conducted by Keith Parsons back late last year.
You can compare what would be your revenue if you were to more somewhere else.

On top of this, Keith tweeted a few results from the compensation survey this week:

Correlation is NOT Causation!

Where you work, and what your certifications are make a huge difference in total possible compensation.
2/7 pic.twitter.com/h5KqaqRb5w

Certifications played a large role in what people earned… yet were NOT statistically significant as a predictor of earnings.
3/7

More years experience, more salary.
But age not on same trajectory more of a curve.
4/7 pic.twitter.com/BbvRW2Zhd3

Vendor supported also had an impact in compensation… as did region. But not statistically able to use in prediction.
5/7 pic.twitter.com/2PAkNzqIba

How many nights spent away from home is a huge predictor of WLAN Professionals compensation.
6/7 pic.twitter.com/IHiGBQqsrJ

Brennan Martin has some cool 802.11eh Canadian Wi-Fi patches. Cost per patch is $6 USD, which is just enough to cover his cost.

The videos from WLPC Phoenix 2017 have been released. Check them out on Keith’s Vimeo page.

Other very good blog articles shared on the Carrier Wave Paper this week.

Following up with WLPC: