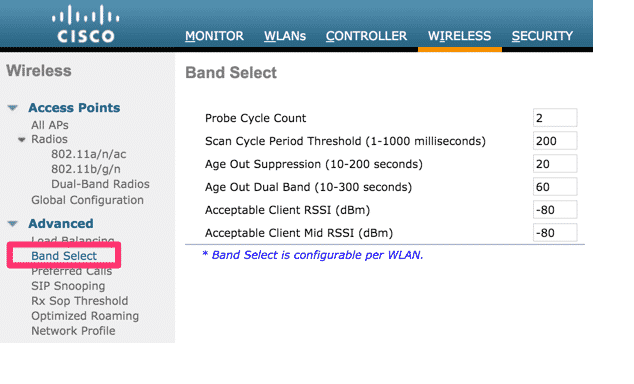 What is wireless band steering? Band steering is a method or feature within enterprise access points to sending dual-band stations to the 5 GHz band instead of the 2.4 GHz band.

Francois Verges joins me as the special guest on the show to discuss the merits of band steering, why you should use it and also what you should look out for if you do implement this feature.

As I work primarily with Cisco wireless networks, I’ve provided an example of how to configure band steering. Cisco’s terminology for band steering is called Band Select.

I won’t go into the differences between Band Select and Band Steering in this episode. This is simply to show everyone where band steering can be enabled. Cisco Band Select is enabled by default on the Cisco WLC./caption

Band Select is enabled by default on a Cisco WLC. The global settings for Band Select are located at Wireless > Advanced > Band Select.

Although Band Select is enabled globally on the controller, the setting itself must be enabled on the WLAN.