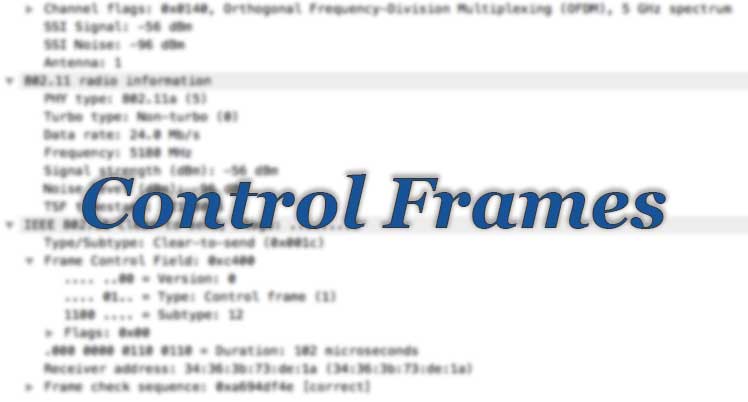 Control frames assist with delivery of data and management frames. They only have layer 2 header and trailer.

The function of a frame is identified in the Frame Control field which will have the Type and Subtype fields.

Both help prevent collisions from occurring by improves upon virtual carrier sense.

Before a station transmits, it must do an RTS/CTS exchange. Prior to transmitting, the station will send an RTS control frame.

Within the RTS frame, the Duration value has the time needed for the next frames to transmit (in microseconds). Listening stations will change their NAV timers to this value. Stations cannot contend for the medium or transmit data until their NAV counts down to 0.

After the RTS frame, the receiving station responds with a CTS control frame.

Every unicast frame, if received properly, is responded to with an acknowledgement frame. This lets the original station know that the frame transfer was successful. Unacknowledged unicast frames will trigger the original transmitter to retransmit its frame.

NAV reservation is performed so a block of frames can be sent. Each frame has the Ack Policy subfield in the QoS Control field set to Block ACK. Originator requests acknowledgement of all outstanding QoS data frames by sending a block acknowledgement request (BlockAckReq) frame.

Used to acknowledge a block of QoS data frames instead of acknowledging each unicast frame independently.

When client is in Power Save mode, some of the transceiver components will shut down to conserve power. The station tells the AP it is using Power Save mode by changing value of Power Management bit to 1.

The CF-End+CF-ACK frame is used to indicate the end of a contention-free period and acknowledge receipt of a frame.

Defined in 802.11n for HT. Used to carry any other control frame, other than another Control Wrapper frame. Carried Frame field contains fields that follow the Address 1 field for the control frame that is being carried.